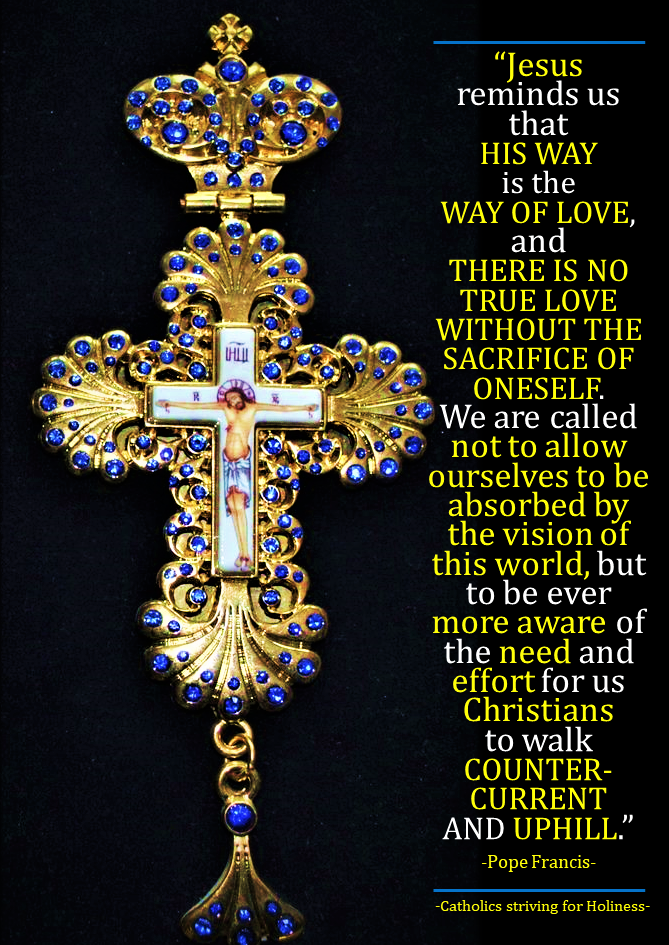 POPE FRANCIS:
THE TEMPTATION OF FOLLOWING CHRIST WITHOUT THE CROSS.

Below you have the ZENIT translation of the address Pope Francis gave at St. Peter’s Square yesterday, Sept. 3, 2017.

SEE AS WELL: MORTIFICATION: WHAT IS IT, WHY IT IS NECESSARY IN CHRISTIAN LIFE, AND WHAT ARE ITS FRUITS in http://wp.me/p6k7Mv-2Lp

Today’s evangelical passage (Cf. Matthew 16:21-27) is the continuation of last Sunday’s, which highlighted the profession of faith of Peter, “rock” on which Jesus wishes to build his Church. Today, in striking contrast, Matthew shows us the reaction of the same Peter when Jesus reveals to the disciples that He will suffer in Jerusalem, be killed and be raised (Cf. v. 21). Peter takes Jesus aside and rebukes Him because this – he says to Him – can’t happen to Him, to Christ. However, Jesus in turn rebukes Peter with harsh words: “Get behind Me, Satan! You are a hindrance to Me; for you are not on the side of God, but of men!” (v. 23). A moment earlier, the Apostle was blessed by the Father, because he had received from Him that revelation, he was a solid “rock” on which Jesus could build His community, and immediately after, he becomes an obstacle, a rock not on which to build but a stumbling block on the way of the Messiah. Jesus knew well that Peter and the others still had a long way to go to becoming His Apostles!

At that point, the Master turned to all those that followed Him, presenting clearly to them the way to follow: “If any man would come after Me, let him deny himself and take up his cross and follow Me” (v. 24). The temptation always, also today, is to want to follow a Christ without the cross, rather to teach God the right way, as Peter: “No, no Lord, not this, it will never happen.”  However, Jesus reminds us that His way is the way of love, and there is no true love without the sacrifice of oneself. We are called not to allow ourselves to be absorbed by the vision of this world, but to be ever more aware of the need and effort for us Christians to walk counter-current and uphill.

Jesus completes His proposal with words that express a great wisdom that is always valid, because they challenge the egocentric mentality and behaviour. He exhorts: “For whoever will save his life will lose it and whoever loses his life for my sake will find it” (v. 25). Contained in this paradox is the Golden Rule that God has inscribed in human nature created in Christ: the rule that love alone gives meaning and happiness to life. To spend one’s talents, one’s energies and one’s time only to save, protect and fulfil oneself leads in reality to lose oneself, that is, to a sad and sterile existence. If, instead, we live for the Lord and we organize our life on love, as Jesus did, we will be able to savour genuine joy, and our life won’t be sterile, it will be fruitful.

In the celebration of the Eucharist we relive the mystery of the cross; not only do we remember but we carry out the memorial of the redeeming Sacrifice, in which the Son of God loses Himself completely to receive Himself again from the Father and thus find us again, who were lost, together with all creatures. Every time we take part in Holy Mass, the Love of the crucified and risen Christ is communicated to us as food and drink, so that we can follow Him on the way every day, in the concrete service of brothers.

May Mary Most Holy, who followed Jesus to Calvary, accompany us also and help us not to be afraid of the cross, but nailed with Jesus; not a cross without Jesus, but a cross with Jesus, namely, the cross to suffer for love of God and of brothers, because this suffering, by the grace of Christ, is fruitful resurrection.

While I renew my spiritual closeness to the populations of Southern Asia, who are still suffering the consequences of the floods, I wish to express my heartfelt participation in the suffering of the inhabitants of Texas, and Louisiana,  affected by a hurricane and exceptional rains, which have caused victims, thousands of displaced and enormous material damages. I ask Mary Most Holy, Consoler of the afflicted, to obtain from the Lord the grace of comfort for these harshly tried brothers of ours.

I greet all of you, dear pilgrims from Italy and from various countries. In particular, the pilgrims of the parishes of Sarmede, Anzano and Cappella Maggiore of the diocese of Vittorio Veneto; the faithful of the Canary Islands; the band of Pontevico, the Confirmed of Mariano al Brembo, of Padria and of Prevalle; the youngsters of Chizzola, of Cagliari and of Bellagio. And I want to thank you, who have wished me a good trip. Thank you; thank you!

I wish you all a good Sunday. And, please, don’t forget to pray for me. Have a good lunch and goodbye!