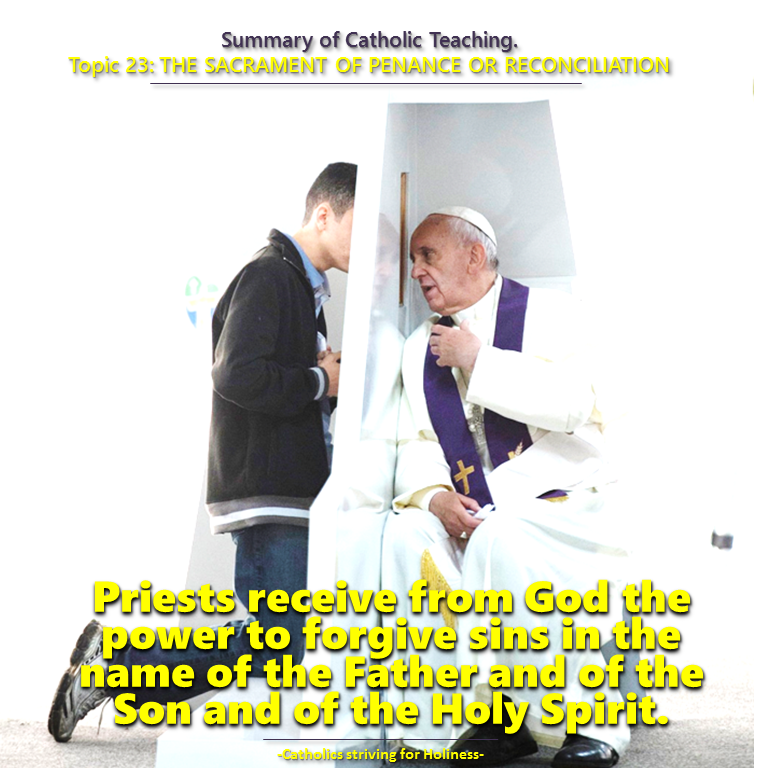 Summary of Catholic Teaching
Topic 23: THE SACRAMENT OF PENANCE
OR RECONCILIATION (2)

1.1 The minister and his role
1.2 Sacramental absolution

3.1 Necessary for the forgiveness of grave sins
3.2 Usefulness of frequent confession

1. Acts of the minister of the sacrament

1.1 The minister and his role

“Christ has entrusted the ministry of reconciliation to his apostles, to the bishops who are their successors and to the priests who are the collaborators of the bishops, all of whom become thereby instruments of the mercy and justice of God. They exercise their power of forgiving sins in the name of the Father and of the Son and of the Holy Spirit ” (Compendium , 307).

The confessor carries out the ministry of reconciliation through the priestly power received in the sacrament of Holy Orders. The exercise of this power is regulated by Church law in such a way that the priest must have the faculty to exercise it either over a determined section of the faithful or over all of them.

“ When he celebrates the sacrament of Penance, the priest is fulfilling the ministry of the Good Shepherd who seeks the lost sheep, of the Good Samaritan who binds up wounds, of the Father who awaits the prodigal son and welcomes him on his return, and of the just and impartial judge whose judgment is both just and merciful. The priest is the sign and the instrument of God’s merciful love for the sinner” (CCC,1465).

“Given the delicacy and greatness of this ministry and the respect due to people, every confessor, without any exception and under very severe penalties, is bound to maintain ‘the sacramental seal’ which means absolute secrecy about the sins revealed to him in confession” (Compendium, 309).

Among the confessor’s actions, some are necessary to enable the penitent to carry out his own part; specifically the confessor must listen to the penitent’s confession and give a penance. In addition, using the priestly power of the sacrament of Holy Orders, the confessor must give absolution by reciting the formula prescribed in the Ritual, “of which the essential words are ‘I absolve you from your sins in the name of the Father and of the Son and of the Holy Spirit.’ ” [1]

Thus “the Father receives the penitent son who comes back to him, Christ places the lost sheep on his shoulders and brings it back to the sheepfold, and the Holy Spirit sanctifies his temple again or lives more fully in it.” [2]

2. Effects of the sacrament of Penance

“The effects of the sacrament of Penance are: reconciliation with God and therefore the forgiveness of sins; reconciliation with the Church; recovery, if it has been lost, of the state of grace; remission of the eternal punishment merited by mortal sins, and remission, at least in part, of the temporal punishment which is the consequence of sin; peace, serenity of conscience and spiritual consolation; and an increase of spiritual strength for the struggle of Christian living” (Compendium, 310).

St. Josemaria Escriva gives a clear summary of these effects: “In this wonderful sacrament our Lord cleanses your soul and fills you with joy and strength to prevent you from giving up the fight, and to help you keep returning to God unwearied, when everything seems black.” [3] “ In this sacrament, the sinner, placing himself before the merciful judgment of God,anticipates in a certain way the judgment to which he will be subjected at the end of his earthly life” (CCC, 1470).

3. Necessity and usefulness of Penance

3.1 Necessary for the forgiveness of grave sins

“This sacrament of penance is, for those who have fallen after baptism, necessary for salvation, as baptism is for those who have not yet been regenerated.” [4] “ According to the Church’s command, ‘after having attained the age of discretion, each of the faithful is bound by an obligation faithfully to confess serious sins at least once a year’ ( Code of Canon Law, canon 989)” (CCC , 1457).

“A person who is conscious of grave sin is not to … receive the body of the Lord without previous sacramental confession unless there is a grave reason and there is no opportunity to confess; in this case the person is to remember the obligation to make an act of perfect contrition which includes the resolution of confessing as soon as possible” ( Code of Canon Law , canon 916;cf. CCC, 1457).

“Without being strictly necessary, confession of everyday faults (venial sins) is nevertheless strongly recommended by the Church Indeed the regular confession of our venial sins helps us form our conscience, fight against evil tendencies, let ourselves be healed by Christ and progress in the life of the Spirit” (CCC, 1458).

“Frequent and careful celebration of this sacrament is also very useful as a remedy for venial sins. This is not a mere ritual repetition or psychological exercise, but a serious striving to perfect the grace of baptism so that, as we bear in our body the death of Jesus Christ, his life may be seen in us ever more clearly.” [5]

4. Celebration of the sacrament of Penance.

“Individual integral confession and absolution remain the only ordinary way for the faithful to reconcile themselves with God and with the Church, unless physical or moral impossibility excuses from this kind of confession.” [6]

“The priest should welcome the penitent with fraternal charity … The penitent then makes the sign of the cross saying, ‘In the name of the Father and of the Son and of the Holy Spirit. Amen.’ Next the priest briefly urges the penitent to have confidence in God.” [7]

“The priest, or the penitent himself, may read a text from Sacred Scripture, or this may be done as part of the preparation for the sacrament. Through the word of God the Christian receives light to recognise his sins and is called to conversion and to confidence in God’s mercy.” [8]

“The penitent then confesses his sins.” [9] The priest urges the penitent to repentance and offers suitable advice to help him start anew and gives him a penance to do. “After this the penitent manifests his contrition and resolution to begin a new life by means of a prayer for God’s pardon.” [10] Then the priest gives him absolution.

Once absolution has been received, the penitent may proclaim God’s mercy and give Him thanks with a brief acclamation taken from Sacred Scripture, or the priest may recite words of praise for God and dismissal of the penitent.

“The sacrament of Penance can also take place in the framework of acommunal celebration in which we prepare ourselves together for confession and give thanks together for the forgiveness received. Here, the personal confession of sins and individual absolution are inserted into a liturgy of the word of God with readings and a homily, an examination of conscience conducted in common, a communal request for forgiveness, the Our Father and a thanksgiving in common” ( CCC , 1482).

“Confessionals are regulated by the norms issued by the respective Episcopal Conferences, who shall ensure that confessionals are located ‘in an open area’ and have ‘a fixed grille,’ so as to permit the faithful and confessors themselves who may wish to make use of them to do so freely.” [11] “Confessions are not to be heard outside a confessional without a just cause.” [12]

Someone who has sinned needs not only forgiveness for having offended God, but also remission of the punishment warranted by this offense. The pardoning of serious faults frees the sinner from the punishment of eternal separation from God, but normally there still remains temporal (non-eternal) punishment due to the sin committed. Venial sins as well incur temporal punishment. “These punishments are imposed by the just and merciful judgment of God for the purification of souls, the defense of the sanctity of the moral order and the restoration of the glory of God to its full majesty. Every sin in fact causes a perturbation in the universal order established by God in His ineffable wisdom and infinite charity, and the destruction of immense values with respect to the sinner himself and to the human community.” [13]

“An indulgence is a remission before God of the temporal punishment due to sins whose guilt has already been forgiven, which the faithful Christian who is duly disposed gains under certain prescribed conditions through the action of the Church which, as the minister of redemption, dispenses and applies with authority the treasury of the satisfactions of Christ and the saints” (CCC, 1471).

“We call these spiritual goods of the communion of saints, the Church’streasury , which is ‘not the sum total of the material goods which have accumulated during the course of the centuries. On the contrary the treasury of the Church is the infinite value, which can never be exhausted, which Christ’s merits have before God. They were offered so that the whole of mankind could be set free from sin and attain communion with the Father. In Christ, the Redeemer himself, the satisfactions and merits of his Redemption exist and find their efficacy.’ ‘This treasury includes as well the prayers and good works of the Blessed Virgin Mary. They are truly immense, unfathomable, and even pristine in their value before God. In the treasury, too, are the prayers and good works of all the saints, all those who have followed in the footsteps of Christ the Lord and by his grace have made their lives holy and carried out the mission in the unity of the Mystical Body’ ” [14](CCC, 1476-1477).

“An indulgence is partial or plenary according as it removes either part or all of the temporal punishment due to sin. The faithful can gain indulgences for themselves or apply them to the dead.”( CCC , 1471).

“ The faithful who at least with a contrite heart perform an action to which a partial indulgence is attached obtain, in addition to the remission of temporal punishment acquired by the action itself, an equal remission of punishment through the intervention of the Church.” [15] “ To acquire a plenary indulgence it is necessary to perform the work to which the indulgence is attached and to fulfill three conditions: sacramental confession, Eucharistic Communion and prayer for the intentions of the Supreme Pontiff. It is further required that all attachment to sin, even to venial sin, be absent. If this disposition is in any way less than complete, or if the prescribed three conditions are not fulfilled, the indulgence will be only partial.” [16]

SUMMARY OF CATHOLIC TEACHING. TOPIC 22: THE SACRAMENT OF PENANCE AND RECONCILIATION (1) inhttps://catholicsstrivingforholiness.com/2016/06/06/summary-of-catholic-teaching-topic-22-the-sacrament-of-penance-and-reconciliation-1/

GUIDE TO CONFESSION. EXAMINATION OF CONSCIENCE (ENGLISH) in https://catholicsstrivingforholiness.com/2015/11/29/on-advent-3-guide-to-confession-examination-of-conscience-for-adults/

GUIDE TO CONFESSION. EXAMINATION OF CONSCIENCE (FILIPINO) in https://catholicsstrivingforholiness.com/2016/02/26/guide-to-the-examination-of-conscience-for-confession-in-filipino-gabay-sa-pagsusuri-ng-budhi-para-sa-pangkukumpisal/

POPE FRANCIS ON CONFESSION AND CONFESSORS IN https://catholicsstrivingforholiness.com/2016/01/14/pope-francis-on-confession-and-confessors/

[4] Council of Trent, session XIV, Doctrine on the Sacrament of Penance, ch..2.

[14] The two internal quotes are from Indulgentiarum Doctrina , 5.