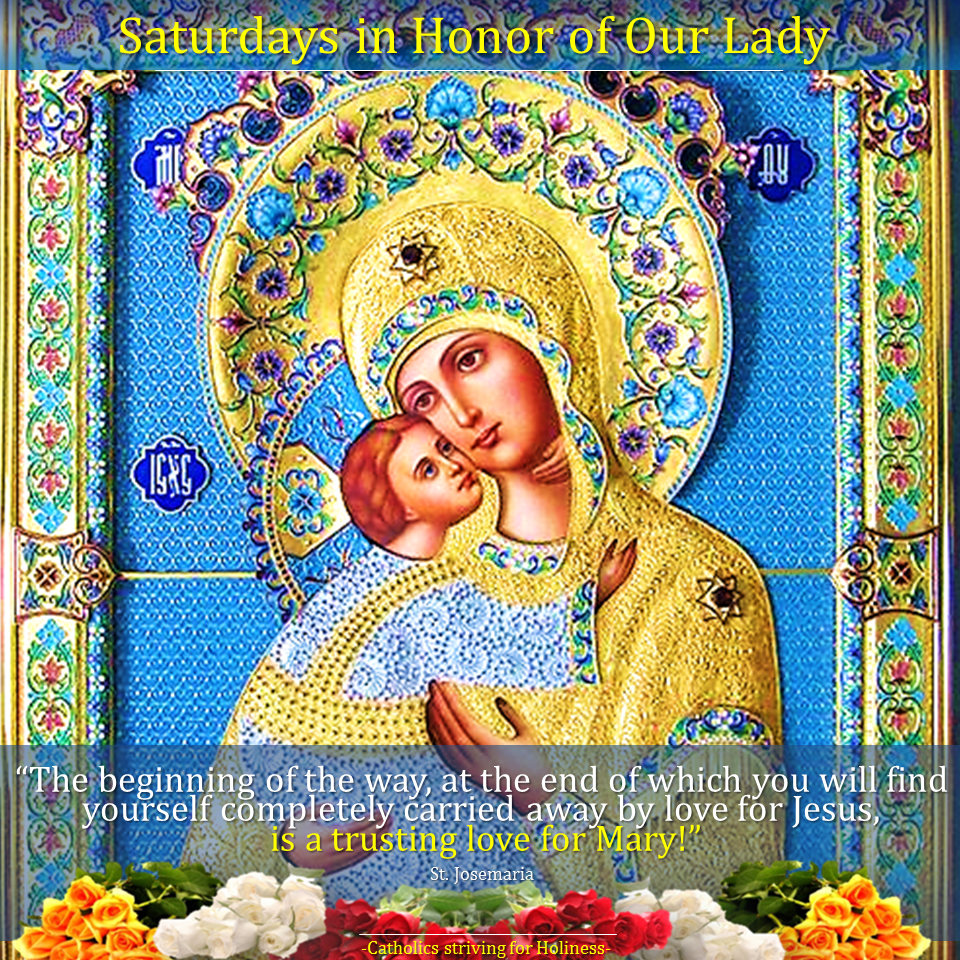 SATURDAY: DAY IN HONOR OF THE BLESSED VIRGIN MARY

Beloved brothers and sisters in Christ, Saturday is the day of Our Lady and Mother, the Blessed Virgin Mary. To dedicate Saturday in honor of the Blessed Virgin Mary is not a personal invention but rather an ancient Church custom which is based on the fact that during Black Saturday, Our Lady was alone and all Christians want to accompany and console her after the death of Her Son, Our Lord Jesus Christ. Some base it as well on a legendary account and popular belief that Our Lord Jesus Christ appeared to Mary on the Saturday, the day after His death to reward her for her steadfast faith in His divinity, which did not waver under the Cross.

What can we do during Saturdays to honor Our Lady? We can offer her a lot of things:

If you want to know more about this Saturday devotion, below you’ll find an article on its historical background from the University of Dayton website which is a worthwhile read on this matter. Neverthekess, let us not forget that Our Mother Mary is THE SHORTCUT TO GET TO GOD (St. Padre Pio) and the EASIEST AND SAFEST PATH TO THE MOST HOLY TRINITY, BEING THE DAUGHTER OF GOD THE FATHER, MOTHER OF GOD THE SON AND SPOUSE OF THE HOLY SPIRIT!

“Mary’s role is to draw men to her Son, placing them before Christ so that they can be reconciled with Him, learning to love Him and follow Him. St. Josemaria said in one of his homilies: “Without ceasing to be a mother, our Lady is able to get each of her children to face his own responsibilities. Mary always does the immense favor of bringing to the cross, of placing face to face with the example of the Son of God, those who come close to her and contemplate her life. It is in this confrontation that Christian life is decided. And here Mary intercedes for us so that our behavior may lead to a reconciliation of the younger brother—you and me—with the firstborn Son of the Father (Christ is Passing By, n. 149).”

Thus “‘the beginning of the way, at the end of which you will find yourself completely carried away by love for Jesus, is a trusting love for Mary (Holy Rosary).’ I wrote that many years ago, in the introduction to a short book on the Rosary, and since then I have often experienced the truth of those words. I am not going to complete that thought here with all sorts of reasons. I invite you to discover it for yourself, showing your love for Mary, opening your heart to her, confiding to her your joys and sorrows, asking her to help you recognize and follow Jesus (Christ is Passing By, n. 143).”

True Marian devotion leads always to a greater love for God the Father, for the Word, and for the Holy Spirit. “Most Sweet Heart of Mary, prepare a safe way. Guide our steps on earth with strength and security. Become for us the path we are to follow, since you in your love know the way, a sure short-cut, to the love of Jesus Christ (Ibid. 147) in Prof. A. Blanco, “St. Josemaria’s Devotion to Mary and Unity of Life” in (http://en.romana.org/art/37_8.0_1).”

With all these facts in mind, and underlining the fact that the Marian devotion leads to a closer relationship with Our Lord Jesus Christ who is the center and source of all graces, let us then have a filial love and affection to Our Lady most especially during Saturdays of the month.

Cordially inviting you to visit and like our FB page in www.fb.com/CatholicsstrivingforHoliness or sign-up to our website,www.catholicsstrivingforholiness.com, so we can have a wider apostolic reach and thus help more people in their Christian life. Thanks! Fr. Rolly A., priest of Opus Dei.

+++HISTORICAL BACKGROUND OF THE SATURDAYS
IN HONOR OF MARY BEGINS HERE+++

“One of the oldest customs traced to honoring Mary on Saturday in the Church of Rome took place on the Saturday before “Whitsunday” [White Sunday].  The newly-baptized members of the Church were led from St. John’s baptistry of the Lateran to Mary’s great shrine on the Esquilin, St. Mary Major [built under Pope Liberius 352-66].  St. John of Damascus’ († 754) writings testify to the celebration of Saturdays dedicated to Mary in the Church of the East.  The liturgical books of the ninth and tenth centuries contain Masses in honor of Mary on Saturday.

The Dictionary of Mary states:

Hence, Saturday acquired its great Marian tone and the existing fast on that day became associated with Mary.  Today, the strongest trace of Mary’s relationship with Saturday occurs in the Liturgy.  Saturday is dedicated to Mary by a Mass or Office of the Blessed Virgin Mary.  Through these liturgical acts, Christians exalt the person of Mary in the action that renews the sacrifice of Christ and in the action that prolongs his prayer.

This liturgical attribution of Saturday to Mary was largely the work of Alcuin (735-804), the Benedictine monk who was “Minister of Education” at the court of Charlemagne and who contributed in a decisive manner to the Carolingian liturgical reform.  Alcuin composed six formularies for Votive (that is, devotional) Masses – one for each day of the week.  And he assigned two formularies to Saturday in honor of Our Lady.  The practice was quickly and joyously embraced by both clergy and laity. …

The custom was specially furthered during the time of the crusades.  Peter of Amiens preached the first crusade and started out with a vanguard for Constantinople on a Saturday, March 8, 1096.  Pope Urban II admonished the faithful to pray the hours of the liturgy in honor of the most holy Virgin for the crusaders.  At the Synod of Clermont the year before, he had prescribed priests to do so.

The custom of dedicating Saturday Masses to Mary was fostered specially in the cloister churches of the various orders, and quickly spread throughout the whole Church.

In addition to the liturgical celebrations on Saturdays, other customs kept step – especially works of neighborly love.  For example, King Louis of France († on the last crusade) fed over one hundred of the poor at his palace.  He ate with them and sent them away richly-laden with gifts.

The great theologians of the twelfth and thirteenth centuries, Sts. Bernard, Thomas, and Bonaventure explained the dedication of Saturdays to Mary by pointing to the time of Christ’s rest in the grave.  Everyone else had abandoned Christ; only Mary continued to believe.  This was her day!

A Dominican missal of the fifteenth century listed additional reasons in a hymn: Saturday is the day when creation was completed.  Therefore it is also celebrated as the day of the fulfillment of the plan of salvation, which found its realization through Mary.  Sunday is the Lord’s Day, so it seemed appropriate to name the day preceeding as Mary’s day.

In the centuries to follow, the Marian Saturdays were expressed in several devotions.  This was the day the faithful selected to go on pilgrimages.  Sodalities held their meetings on Saturdays and called them Fraternity Saturdays or Sodality Saturdays.  The seven sorrows of Mary were commemorated on seven consecutive Saturdays.  The fifteen Saturdays before the liturgy in honor of Mary as Queen of the Rosary [October 7] recalled the fifteen decades of the rosary.  In some areas this was the day that the crops and harvests were blessed and celebrated.  A German manuscript from 1673 states:

The people of Hamingen have from ancient times vowed to hold a procession to this church every Saturday from the feast of St. Gregory to the feast of St. James [to ask] for protection for the fruits of the fields and against the storms and hail.  Their descendants failed to do so to their great misfortune because the hail did great damage.  After they renewed the practice, no one heard further of great damage.

The growing devotion in honor of the Immaculate Conception by the Franciscans contributed to furthering the Marian Saturdays.  In 1633 the Order’s Chapter determined that a Holy Mass in honor of this mystery was to be celebrated.

Over time, it became customary for Catholics everywhere to consider Saturday Mary’s day just as Sunday is the Lord’s Day.  Many of the faithful commemorated the day by attending Mass, receiving the Eucharist, and praying the rosary as a family or attending an evening devotion at the Church, as well as performing works of neighborly love in many forms.

Vatican II with its liturgical reforms did not abolish the practice of Masses in honor of Our Lady.  Additions were made to expand the number of the liturgies.”