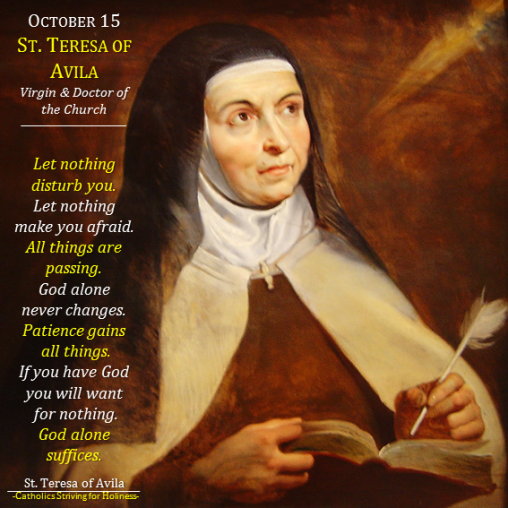 October 15
ST. TERESA OF AVILA
Virgin and Doctor of the Church

Dear friends, on Oct. 15, we will be celebrating the 500th Anniversary of the Birth of St. Teresa of Avila, one of the greatest Spanish saints not only known for her outstanding works of mysticism but also of the reform she initiated in the Carmelite Order bring to the renewal of the entire religious and ecclesiastical community in the spirit of the Council of Trent,  all these without suffering numerous hardships and misunderstanding. She was declared Doctor of the Church in 1917 by Blessed Paul VI in 1970 and revered as the Doctor of Prayer.

Let us ask God through the intercession of St. Teresa of Avila so that we may also reach the heights of contemplative union with God  in our daily life and be convinced like her that “God alone suffices”.

“Let nothing disturb you.
Let nothing make you afraid.
All things are passing.
God alone never changes.
Patience gains all things.
If you have God you will want for nothing.
God alone suffices.”

Below you’ll find the profile of St. Teresa de Avila which I adapted and summarized based on the entry found in wikipedia.org. Happy reading and meditation!

-Fr. Rolly Arjonillo, priest of Opus Dei, CATHOLICS STRIVING FOR HOLINESS. We are also in Facebook: www.facebook.com/CatholicsstrivingforHoliness. Hope you like our page and invite your friends as well to do so in order to help more people.

If you have friends who do not have a Facebook account but you think would benefit from our posts, they can receive our posts by email once they follow us and subscribe in www.catholicsstrivingforholiness.com

Teresa de Cepeda y Ahumada was born in 1515 in Gotarrendura, in the province of Ávila, Spain. Her paternal grandfather, Juan Sánchez de Toledo, was a Jewish convert to Christianity. Her father, Alonso Sánchez de Cepeda, bought a knighthood and successfully assimilated into Christian society. Teresa’s mother, Beatriz de Ahumada y Cuevas, was very keen to educate and raise her daughter as a pious Christian. As a result of her mother’s upbringing, Teresa became fascinated by accounts of the lives of the saints, and at the age of seven, ran away from home with her brother Rodrigo to find martyrdom among the Moors. Her uncle stopped them as he was returning to the town, having spotted the two outside the town walls.

Teresa was 14 when her mother died. During her grief, she embraced a profound devotion to the Virgin Mary as her spiritual mother.  Along with this good resolution, however, she also developed an unrestrained interest in reading medieval tales of knighthood and the typical adolescent preoccupation for her own appearance. Teresa was then sent to the Augustinian nuns at Ávila for her education.

In the monastery, she frequently got ill and suffered from it. During her sickness, she experienced periods of religious illumination through the use of the devotional book “Tercer abecedario espiritual,” translated as the Third Spiritual Alphabet (published in 1527 and written by Francisco de Osuna) from which she learned the importance of examinations of conscience, mental prayer and contemplation. She also read ascetical works of St. Peter pf Alcantara such as the “Tractatus de oratione et meditatione” (Treatise on prayer and meditation).

She underwent a profound conversion and spiritual progress during her illness such that her union with God became more intimate. She also received the blessing or “gift of tears” while understanding the awful terror of sin.

At around 1556, when some friends suggested that her newfound knowledge was diabolical, St. Teresa began to intensify her mortifications. However, her confessor, the Jesuit Saint Francis Borgia, reassured her of the divine origin and inspiration of her thoughts. On St. Peter’s Day in 1559, Teresa became firmly convinced that Jesus Christ presented himself to her in bodily form, though invisible. These visions lasted almost uninterrupted for more than two years. In another vision, a seraph drove the fiery point of a golden lance repeatedly through her heart, causing an ineffable spiritual-bodily pain.

“I saw in his hand a long spear of gold, and at the point there seemed to be a little fire. He appeared to me to be thrusting it at times into my heart, and to pierce my very entrails; when he drew it out, he seemed to draw them out also, and to leave me all on fire with a great love of God. The pain was so great, that it made me moan; and yet so surpassing was the sweetness of this excessive pain, that I could not wish to be rid of it…”

This vision was the inspiration for one of Bernini’s most famous works, the Ecstasy of Saint Teresa at Santa Maria della Vittoria in Rome.

The memory of this episode served as an inspiration throughout the rest of her life, and motivated her lifelong imitation of the life and suffering of Jesus, epitomized in the motto usually associated with her: Lord, either let me suffer or let me die.

When St.Teresa entered a Carmelite Monastery of the Incarnation in Ávila, Spain, on 2 November 1535, she saw for herself the laxity of the spiritual atmosphere in that monastery: the violations of the observance of the cloistered life, daily visits without useful purpose, impregnating the atmosphere with frivolity and mundanity, and thus, making it impossible to progress in a contemplative life in the monastery.    St. Teresa clearly saw that she had to do something about it.

With the help of the Franciscan priest Saint Peter of Alcantara who became her spiritual guide and counselor, she resolved to found a reformed Carmelite convent, correcting the laxity which she had found in the Cloister of the Incarnation and others.  Guimara de Ulloa, a wealthy friend, helped her provide the funding and the construction of a new monastery, St. Joseph (San José) in 1562.

Its absolute poverty of the new monastery scandalized the citizens and authorities of Ávila, and the small house with its chapel was about to be suppressed if not for the support of powerful patrons, including the bishop himself, who applauded Teresa’s initiative.

Nevertheless, St. Teresa received a papal sanction on March 1563 due to her prime principle of absolute poverty and renunciation of property. This prompter her to formulate a “Constitution” which included the revival of the earlier, stricter rules, supplemented by new regulations such as the three disciplines of ceremonial flagellation prescribed for the divine service every week, and the discalceation of the nun. For the first five years, Teresa remained in pious seclusion, engaged in writing.

Finally, in 1567, St. Teresa received the permission from the Carmelite general, Rubeo de Ravenna, to establish new houses of her reformed order, and in this led her to make long journeys throughout Spain, described in her “Libro de las Fundaciones” (Book on Foundations). Between 1567 and 1571, reform convents were established at Medina del Campo, Malagón, Valladolid, Toledo, Pastrana, Salamanca, and Alba de Tormes.

She was also given the permission to set up two houses for men who wished to adopt the reforms. With the help of St. John of the Cross and Anthony of Jesus, they founded the first convent of Discalced Carmelite Brethren in November 1568 at Duruello. Another friend, Jerónimo Gracian, Carmelite inspector of the older observance of Andalusia and apostolic commissioner, and later provincial of the Teresian reforms, gave her powerful support in founding convents at Segovia (1571), Beas de Segura (1574), Seville (1575), and Caravaca de la Cruz (Murcia, 1576).

In 1576, a series of persecutions began on the part of the older observant Carmelite order against Teresa, her friends, and her reforms. St. Teresa was forbidden further founding of convents and was condemned by the general chapter of the Carmelite order to a voluntary retirement to one of her institutions. To this, she obeyed and chose St. Joseph’s monastery at Toledo. Simultaneously, her friends, collaborators and subordinates were also subjected to greater trials.

In 1579, after several years of her pleadings by letter to King Philip II of Spain, she obtained his assistance and relief. All the processes before the inquisition against her, Gracian, and others were dropped, which allowed the reform to continue. Pope Gregory XIII issued a document allowing a special provincial for the younger branch of the discalced nuns, and a royal edict created a protective board of four assessors for the reform.

St. Teresa founded convents at Villanueva de la Jara in northern Andalusia (1580), Palencia (1580), Soria (1581), Burgos, and Granada (1582) during the last years of her life, adding up to a total of foundation of 17 convents for women (except for one) and the same number for men during  her 20-year reform activity.

Her final illness aggravated during  one of her journeys from Burgos to Alba de Tormes and she died in 1582, just as during which the Catholic nations were making the switch from the Julian to the Gregorian calendar, requiring the removal of 5–14 October from the calendar. She died either before midnight of 4 October or early in the morning of 15 October which is celebrated as her feast day. Her last words were: “My Lord, it is time to move on. Well then, may your will be done. O my Lord and my Spouse, the hour that I have longed for has come. It is time to meet one another.”

Forty years after her death, she was canonized in 1622 by Pope Gregory XV. The Spanish Cortes exalted her to patroness of Spain in 1617, and the University of Salamanca previously conferred the title Doctor of the Church with a diploma which is distinct from the papal honor of Doctor of the Church, which is always conferred posthumously and was finally bestowed upon her by Pope Paul VI in December 27, 1970 along with Saint Catherine of Siena making them the first women to be awarded the distinction. Teresa is revered as the Doctor of Prayer.