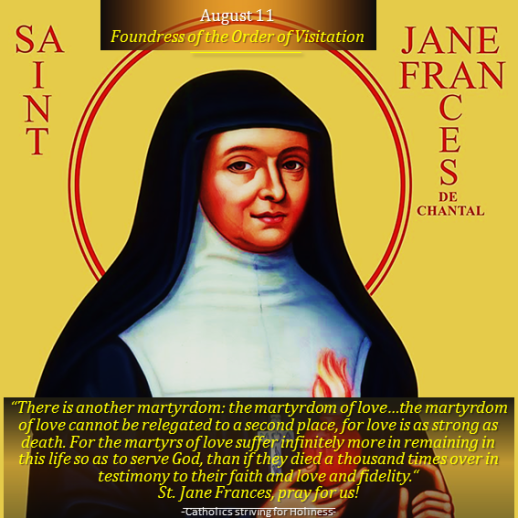 August 12: ST. JANE FRANCES DE CHANTAL.
Foundress of the Order of Visitation. Learn how to forgive.
The Martyrdom of Love

Today we celebrate the memorial of St. Jane Frances de Chantal, a woman who possessed extraordinary traits as a cheerful Christian mother, wife, widower and later nun, foundress of the Order of Visitation. A woman who struggled to forgive the person who accidentally killed her husband when she was still a young wife of 28 years old, from whom we can learn a lot, especially the virtue of forgiving those who have done us wrong, following the example of Our Lord Jesus Christ on the Cross.

Below is a brief profile of her life and the 2nd reading of today’s Divine office, which I hope would be of use to you.

What a way to start a marriage! Jane no sooner arrived at her new home then she discovered she might lose it. Her husband, Christophe, had not only inherited the title of baron but enormous debts as well.

But Jane had not come to the marriage empty-handed. She brought with her a deep faith instilled by her father who made daily religious discussion fun, allowing the children to talk about anything — even controversial topics. She also brought a good-hearted way that made a friend comment, “Even stupid jokes were funny when she told them.”

These qualities helped the twenty-year-old French woman take charge by personally organizing and supervising every detail of the estate, a method which not only brought the finances under control but won her employees’ hearts as well.

Despite the early financial worries, she and her husband shared “one heart and one soul.” They were devoted to each other and to their four children.

One way Jane shared her blessings was by giving bread and soup personally to the poor who came to her door. Often people who had just received food from her would pretend to leave, go around the house and get back in line for more. When asked why she let these people get away with this, Jane said, “What if God turned me away when I came back to him again and again with the same request?”

Her happiness was shattered when Christophe was killed in a hunting accident. Before he died, her husband forgave the man who shot him, saying to the man, “Don’t commit the sin of hating yourself when you have done nothing wrong.” The heartbroken Jane, however, had to struggle with forgiveness for a long time. At first she tried just greeting him on the street. When she was able to do that, she invited him to her house. Finally she was able to forgive the man so completely that she even became godmother to his child.

These troubles opened her heart to her longing for God and she sought God in prayer and a deepening spiritual life. Her commitment to God impressed Saint Francis de Sales, the bishop who became her director and best friend. Their friendship started before they even met, for them saw each other in dreams, and continued in letters throughout their lives.

With Francis’ support, Jane founded the Visitation order for women who were rejected by other orders because of poor health or age. She even accepted a woman who was 83 years old. When people criticized her, she said, “What do you want me to do? I like sick people myself; I’m on their side.” She believed that people should have a chance to live their calling regardless of their health.

Still a devoted mother, she was constantly concerned about the materialistic ways of one of her daughters. Her daughter finally asked her for spiritual direction as did may others, including an ambassador and her brother, an archbishop. Her advice always reflected her very gentle and loving approach to spirituality:

“Should you fall even fifty times a day, never on any account should that surprise or worry you. Instead, ever so gently set your heart back in the right direction and practice the opposite virtue, all the time speaking words of love and trust to our Lord after you have committed a thousand faults, as much as if you had committed only one. Once we have humbled ourselves for the faults God allows us to become aware of in ourselves, we must forget them and go forward.”

We have been told the secret of happiness is finding: finding yourself, finding love, finding the right job. Jane believed the secret of happiness was in “losing,” that we should “throw ourselves into God as a little drop of water into the sea, and lose ourselves indeed in the Ocean of the divine goodness.” She advised a man who wrote to her about all the afflictions he suffered “to lose all these things in God. These words produced such an effect in the soul, that he wrote me that he was wholly astonished, and ravished with joy.”

Prayer: Saint Jane, you forgave the man who killed your husband. Help me learn to forgive a particular person in my life who has caused me harm. You know how difficult it is to forgive. Help me to take the steps you took to welcome this person back into my life. Amen

From The Memoirs by the secretary of St. Jane Frances de Chantal

LOVE IS AS STRONG AS DEATH

One day Saint Jane spoke the following eloquent words, which listeners took down exactly as spoken:

“My dear daughters, many of our holy fathers in the faith, men who were pillars of the Church, did not die martyrs. Why do you think this was?” Each one present offered an answer; then their mother continued. “Well, I myself think it was because there is another martyrdom: the martyrdom of love. Here God keeps his servants and handmaids in this present life so that they may labor for him, and he makes of them both martyrs and confessors. I know,” she added, “that the Daughters of the Visitation are meant to be martyrs of this kind, and that, by the favor of God, some of them, more fortunate than others in that their desire has been granted, will actually suffer such a martyrdom.”

One sister asked what form this martyrdom took. The saint answered: “Yield yourself fully to God, and you will find out! Divine love takes its sword to the hidden recesses of our inmost soul and divides us from ourselves. I know one person whom love cut off from all that was dearest to her, just as completely and effectively as if a tyrant’s blade had severed spirit from body.”

We realized that she was speaking of herself. When another sister asked how long the martyrdom would continue, the Saint replied: “From the moment when we commit ourselves unreservedly to God, until our last breath. I am speaking, of course, of great-souled individuals who keep nothing back for themselves, but instead are faithful in love. Our Lord does not intend this martyrdom for those who are weak in love and perseverance. Such people he lets continue on their mediocre way, so that they will not be lost to him; he never does violence to our free will.”

Finally, the saint was asked whether this martyrdom of love could be put on the same level as martyrdom of the body. She answered: “We should not worry about equality. I do think, however, that the martyrdom of love cannot be relegated to a second place, for love is as strong as death. For the martyrs of love suffer infinitely more in remaining in this life so as to serve God, than if they died a thousand times over in testimony to their faith and love and fidelity.”