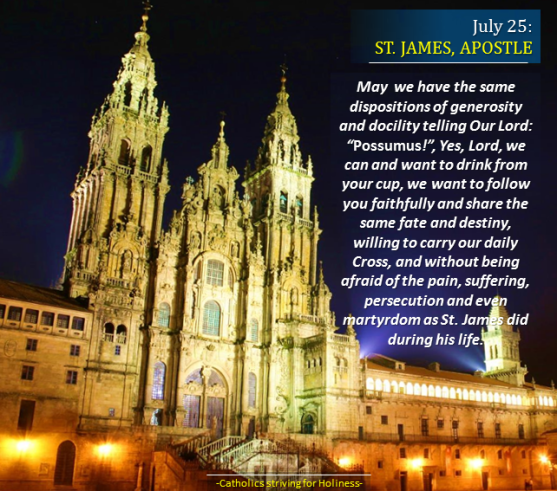 “James, from Bethsaida, was the son of Zebedee and the brother of John. He was one of the three disciples to witness the Transfiguration and the agony in the Garden besides other important events of our Saviour’s public life. He and his brother’s impetuous zeal caused the Lord to name them the Sons of Thunder.

James developed his apostolate in Judaea and Samaria. According to tradition he preached the Gospel in Spain. On his return to Palestine about the year 44, he became the first Apostle to suffer martyrdom, at the order of Herod Agrippa. His mortal remains were later brought to Santiago de Compostela, in Spain, which became a popular medieval pilgrimage site and a sanctuary of the Faith for all of Europe (F. Fernández-Carvajal. “In Conversation with God, vol. 7, n. 5).”

In the Gospel of today’s Mass, their mother, Salome, thinking that the earthly reign of the Messiah is about to be established, asks that her sons be given the two foremost positions in it.

“Command that these two sons of mine may sit, one at your right hand and one at your left, in your Kingdom (mt 20:21).”

Our Lord Christ reprimands them for not having understood the true — spiritual — nature of His Kingdom and not realizing that FOLLOWING HIM FAITHFULLY DEMANDS SERVICE, SACRIFICE, SELF-GIVING EVEN UP TO MARTYRDOM. So he told them:

Jesus asked them if they were prepared to drink the cup of the Lord, to which they said, Possumus!  (Yes, we can!):

Jesus tells them: “Yes, you will drink from my cup (Mt 20:23),” James and John will participate in his sufferings, and will complete His Passion in their own bodies. James was to die by decapitation on 44. A.D and John was to suffer innumerable trials and persecutions during his life.

The great Christian revolution has been to convert pain into fruitful suffering and to turn a bad thing into something good. We have deprived the devil of this weapon; and with it we can conquer eternity.
St. Josemaria, Furrow, 887.

Dear friends: Let us ask Our Lord through the intercession of the Blessed Virgin Mary and of St. James, that we may have the same dispositions of generosity and docility telling our Lord: “Possumus!”, yes, Lord, we can and want to drink from your cup, we want to follow you faithfully and share your fate and destiny by being faithful Christians willing to carry our daily cross, without being afraid of the pain, suffering, persecution and even martyrdom as st. James did during his life. Let us also pray for the re-evangelization of Spain.